Gone is the traditional voice alarm router, instead VIGIL3 control is via audio input and audio output modules and an Ethernet backbone.

Rather than a centralised voice alarm router, the audio inputs (i.e. microphones) and audio outputs for a VIGIL3 system (i.e. zones/areas) are delivered via modules. Therefore there is no longer the need to take up valuable rack space with a traditional router. The VIGIL3 system is built on a fault-tolerant Ethernet backbone, without the need for any Ethernet switches, and due to its modular design is truly scalable. VIGIL3 is our most flexible and scalable voice alarm system to date.

Each of the audio output modules supports up to eight zones and, with the connection of up to 100 modules possible, a single VIGIL3 voice alarm system can have as many as an incredible 800 zones.

Configuring a VIGIL3 system – no matter what size, centralised or de-centralised – can be done from one single point. Therefore, any system adjustments are straight-forward and can be done without the need to walk potentially long distances between the different points of the system. An engineer can simply make the changes, such as the uploading of new messages or any other configuration requirement at the closest or most accessible point, saving valuable time. 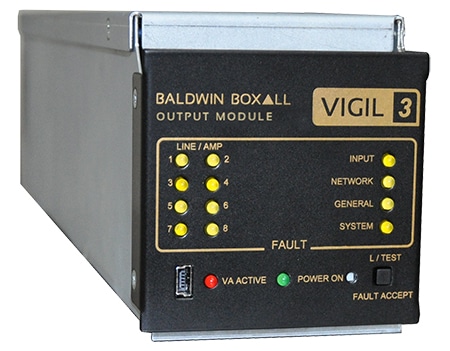 The audio output module fits neatly alongside the battery charger module and the two modules combined take up only one third of the width of a standard mainframe. This provides space for two of the VIGIL3 transformerless amplifier modules in the same mainframe. Each audio output and input module combination can service up to five of the amplifiers in the range.

More products in the VIGIL3 range: