Baldwin Boxall is looking forward to welcoming visitors to ISE in February stand number 3-C87, which they are sharing with their Dutch distributor TAU Audio Solutions. The company will be demonstrating their exciting new products at the show and staff are anticipating a lot of interest. 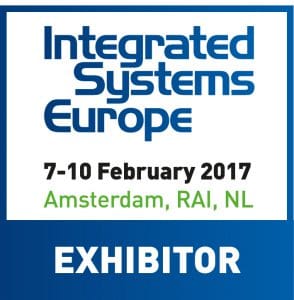 The Eclipse4 uses proven EVAS routeing technology and has the ability to include up to four of the company’s new VIGIL3 amplifier modules (totalling up to 2,400 Watts). With its shallow profile, modular nature and outstanding networking capabilities, the VIGIL Eclipse4 is the perfect solution for many installations – small or large.

As with all Baldwin Boxall voice alarm systems, VIGIL Eclipse4 will simply connect to any leading fire panel via the internal fire alarm interface.

This is the next generation of voice alarm amplifiers from the UK manufacturer Baldwin Boxall. Increased power, smaller size, lighter weight are just a few of the features of this new range of amplifiers.

There are five amplifier modules in the range – each one is a highly efficient unit with a built in power supply and floating transformerless output. The amplifiers weigh up to an incredible 66% lighter on a like-for-like basis, when compared with VIGIL2.

One great feature of the VIGIL3 amplifiers is the ‘sleep’ facility that operates when the system is on mains power and not just when running on batteries. This, when combined with the considerable reduction of the materials used (including the lack of 100V line transformers), means that VIGIL3 amplifiers are more environmentally friendly than their VIGIL2 predecessors.

Amazingly, although each unit has an integral power supply and the amplifier power has increased, the units themselves are reduced in size. This smaller size means less rack space is needed and, for larger systems, fewer rack enclosures which, in turn, means the rack footprint is reduced. Another space saving factor is due to the smaller system backup batteries required (on a Watt by Watt basis). 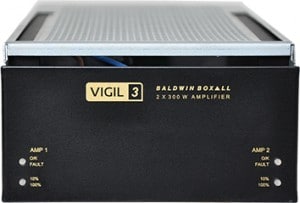 With the inclusion of a power supply in each of the new VIGIL3 amplifiers, the necessary charger module is now smaller in size. The clever new VIGIL3 charger unit is in fact half the size of its predecessor and is capable of monitoring and charging an impressive five VIGIL3 amplifiers.

The smaller size attributes of the new VIGIL3 range help reduce the cost of the installation and, perhaps more importantly, save space – a valuable asset for many. Add this to the environmental aspects of VIGIL3 and it can be seen that this system will be of great benefit to installers and users alike.

Also being demonstrated on Baldwin Boxall’s stand at ISE is the exciting new touch screen control microphone. The unit is a multi-function user interface for VIGIL voice alarm systems which is easy to use via the touch sensitive control screen.

This great new microphone has special features for the user, including NFC smart card or pin code access and the ability to connect a third party music audio feed for broadcast to user selected areas. Other user features include zonal volume adjustment of non-critical broadcasts, ability to record, store and playback messages, configurable buttons, and more.

Safety officers and facility managers will like the technical features and benefits of the microphone including, dual output facility, emergency control mode, system configuration ability, detailed activity logs, and more.

The new microphone is compatible with established VIGIL2 systems, providing the ability to swap out current microphones, should this be felt necessary.

Based in East Sussex, UK, the company prides itself not only on the quality of design and build of its products, but also on its customer service and support, which Directors and staff believe is paramount to their success. Customer testimonials and a long-term customer relationships prove this to be the case.

Baldwin Boxall’s staff will be on stand 3-C87 and really look forward to meeting you.