The new buildings, in the Classical architectural style, each with specialist functions are fitted with compact, self-contained, modular VIGIL Eclipse4 units in a distributed network particularly suited to this scenario. Each Eclipse4 box incorporates everything it needs to run a fully redundant local evacuation and PA system, with battery back-up and four individually addressable loudspeaker circuits. That includes the BVRD2M DSP-controlled router, VIGIL3 amplifiers and VIGIL3 charger modules. 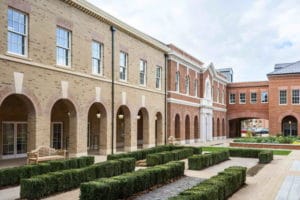 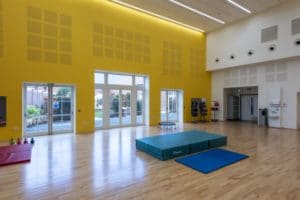 The heritage building, Stanford Hall, has 23 Eclipse units with local fire panels connected via network cards in a loop configuration across the entire site via a combination of copper and multimode fibre. This ensures network cabling, fault tolerance and access to nearly 50 broadcast zones from any local microphone.
Steve Bladon, Operations Manager at Baldwin Boxall, said “The choice of the Eclipse4 system comes down to several factors… available space is a significant one as you don’t need large fire cabinets anywhere – the wall boxes are quite small and discreet and fit into tight spaces.
“Also, on a site like this where there are a lot of buildings but fewer zones required in each building, the distributed network comes into its own. Each Eclipse4 box is its own self-contained system as well as being part of a network that doesn’t need a single central hub or router.
“For this kind of installation an Eclipse4 can be a very efficient and cost-effective solution.”

The DMRC voice evacuation and PA network uses a number of microphone input options, including BDM404 intelligent four-zone paging microphones and the new BVRDTSM touch screen microphones – a versatile unit with integrated management of speech, music and messaging across the network, including all-call selection and high priority emergency paging.
During the installation of the system, it was noticed that the alarm selection would not be appropriate for use at the facility as it sounded very similar to a standard alarm tone commonly used at active armed forces sites – potentially quite traumatic and confusing for some patients. Baldwin Boxall worked closely with the client and with its extensive content library to find something more suitable.

Chris Hartup is the Sales Manager at Baldwin Boxall. “We normally provide an initial selection of tones that comply with the relevant regulations to get customers started,” he explains. “But of course, if they don’t like them or they are not appropriate we can go back to our library, or even arrange for custom-recorded content. We have good relationships with several broadcast recording studios with experience in producing voice-overs and so on.”