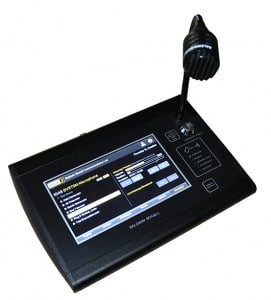 The new touchscreen microphone is easy to use and enables total control of a VIGIL2 voice evacuation system. In the event of a fire, or other evacuation emergency, the new microphone has the ability to take top priority, enabling the operator to take full control of the situation.

During the commissioning stage of an installation, it will be a straightforward procedure to set up the microphone for any size of system. The layout and display (like Baldwin Boxall’s already popular touchscreen PC systems) will be intuitive to operate.

Features of the unit include the facility to record and play back messages at any given time. It also has a local music input and the ability to access various logs including history and faults using the touchscreen. As you would expect from Baldwin Boxall, there is also the facility to have a hardwire bypass for use in the unlikely event of a system failure.

Learn more about the microphone, and the company’s other new products, on Baldwin Boxall’s stand (number 3-C111) at the show, where staff look forward to meeting you.