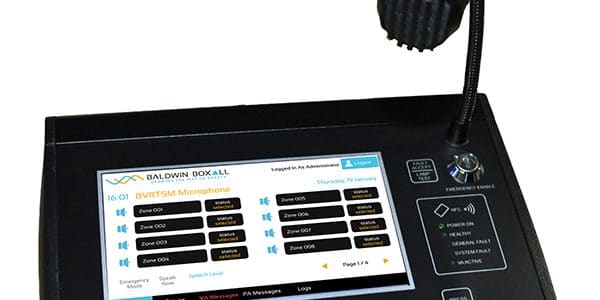 We are delighted to announce that we have just received the EN54 certificate for our brand new touch screen microphone, a market-leading unit which customers are already keen to get their hands on.

Users will enjoy the many impressive features of the unit – including the ability to connect a third party music source and route the output to selected zones. Other nice features include: the ability to record non-critical messages for broadcast to any zone, and a message broadcast scheduler for regular/routine announcements. The unit also has configurable function buttons for automatic multiple message playback and a detailed activity log.

User level access to the microphone is initiated via an NFC (Near Field Communication) card or by PIN entry.

Installers and safety managers will be able to take advantage of features like the dual output facility – enabling the routeing of broadcasts via a different rack on the system. This is a feature that is useful on sites where separate ‘A circuit’ and ‘B circuit’ racks are required. The racks would be installed in alternative areas of the building (or site) – each one with the ability to broadcast to the entire building using either the A or B loudspeaker circuit.

Known as the BVRDTSM, the unit not only looks good and has great functionality, it also has a serious side. It is a fully functioning emergency, voice alarm system microphone. When placed into ‘emergency mode’ the microphone is given the highest priority on the system – automatically overriding any other broadcasts and allowing the operator/building manager to take full command of the situation.

The new microphone has been designed to work with our future VIGIL3 voice alarm products and can also be added to any VIGIL2 voice alarm system that is currently installed.

Commenting, Chris Hartup, Sales Manager, said “We are really excited about this new microphone – it really is an amazing product; those that have seen it have been genuinely impressed. To have the certificate now in our hands makes all the hard work worthwhile. We have a fantastic team in the Development department – well actually in the whole factory – and I am proud to be a part of it.”